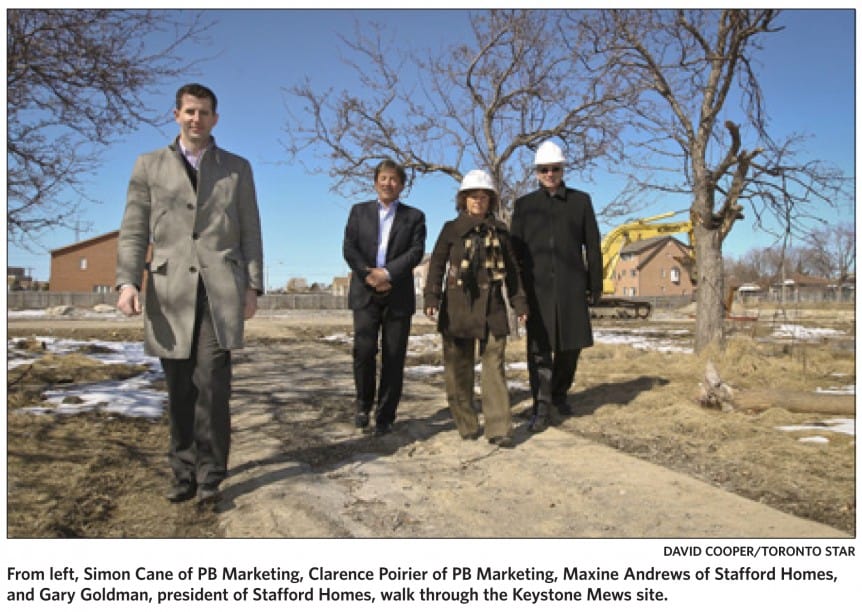 Gary Goldman prides himself on spotting diamonds in the rough. Indeed, despite how hard it is these days for developers to find decent land within the GTA on which to build low-rise housing, Goldman’s company has thrived on transforming former industrial sites into new communities. “We consider ourselves inner-city remediation and redevelopment specialists,” he boasts in an interview at his St. Clair Ave. W. office.

Such is the case with Stafford Homes’s current project, Keystone Mews, an infill development near Eglinton Ave. E. and O’Connor Dr. that includes 10 semi-detached homes and 42 Victorian-style freehold townhouses. The subdivision will be built on a three-acre site previously occupied by a fruit-juice bottling company. Existing subdivisions surround Keystone Mews, which is based in an established neighbourhood that’s well-served by shops and amenities, not stranded in a field somewhere on the GTA fringe. “A lot of people want to come back into the city,” Goldman notes. “We’re offering single-family housing in a location that already has all the infrastructure, including schools, churches or mosques, skating rinks and shopping centres.” Keystone Mews’s three- and four-bedroom brick homes range from 1,635 to 2,260 square feet. 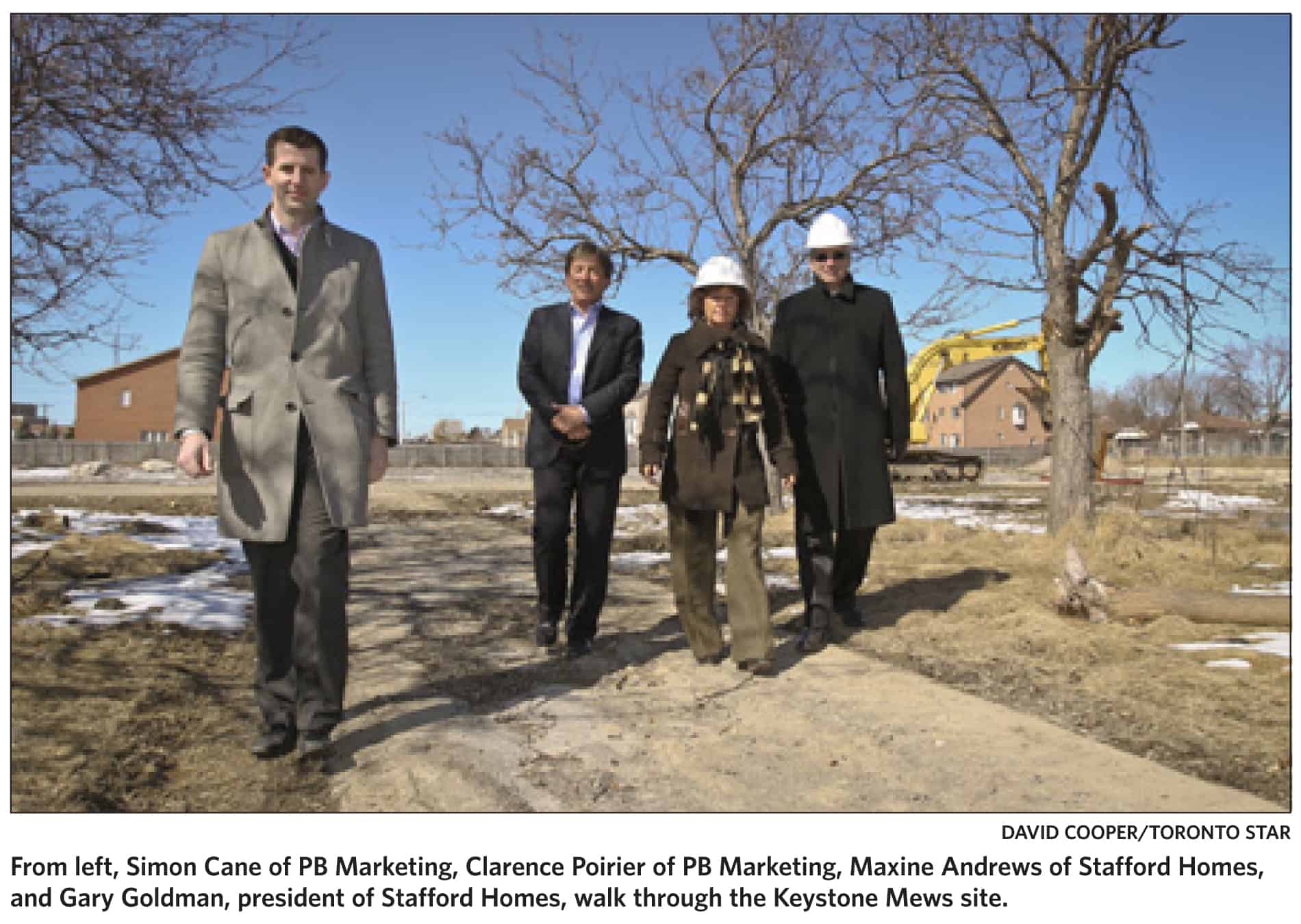 Remaining inventory starts at $474,990 and goes to $550,990. Homes have nine-foot main-floor ceilings. There is ceramic tile in the foyer, kitchen and bathrooms, broadloom on staircases and hardwood flooring in the living and dining areas.

Kitchens have granite countertops and ceramic tile backsplashes, as well as a breakfast island and stainless steel appliances. Bathrooms have pedestal sinks, white fixtures and ceramic tile. The ensuite includes a stand-alone shower and two-person soaker tub. Some of the larger homes will have a “master retreat” — a fourth-floor sitting room off the master bedroom that overlooks the floor below. “Young couples with children don’t have to sacrifice or feel crammed in,” says Goldman. “With this it can still be a family home, but it gives them a getaway.”

Keystone Mews officially went on sale in the new year. As of late March, 23 of the 52 homes had been sold, including half of the 10 semidetached units. Work on services is expected to begin in the next few months and Goldman says occupancy will begin before the end of 2011.

So far much of the interest in Keystone Mews has been from local buyers looking for a home upgrade, according to the project’s sales and marketing manager Clarence Poirier. “It was a very low key marketing program,” says Poirier, the principal of P & B Marketing. “We had lots of people driving by and seeing (signs for the project), so we didn’t really need to have a huge media campaign.”

Poirier knows the area well, having worked with Stafford Homes on the sales and marketing for Victoria

Village, a stacked townhouse project at Victoria Park and Eglinton. He acknowledges that the name Keystone Mews doesn’t stem from any actual connection to the housing project’s setting. “We wanted something colourful and fun, but we couldn’t really attach ourselves to a river or anything like that.”

The project’s selling points are simple: value and a central location. “You’re getting a three-bedroom home with all the bells and whistles for an affordable price, and you don’t have to drive to Pickering or Ajax,” he says. “You’re in the GTA right next to transit and all the amenities.” Nearby shopping hubs include Eglinton Square, Golden Mile and Eglinton Town Centre. And recreation buffs are in close proximity to Edge Park and Taylor Creek Park.

“It’s wonderful to see neighbourhoods like (Victoria Village) starting to have a renaissance,” says Poirier. “These areas didn’t see much new development for a couple of decades, but now it’s springing up where industry used to be.”

Stafford Homes began acquiring the land for Keystone Mews back in 2006. “The site was a natural for us,” Goldman says, noting the subdivisions that surrounded the industrial property on two sides, and the existing roads and municipal services already in place.

The project did face hurdles, though. Things stalled at one point, for example, while Goldman wrangled with the city’s planning department over whether the garages at Keystone should be drive-in, which the developer was proposing, or rear-access. The matter ended up before the Ontario Municipal Board, which ultimately ruled in favour of Stafford. “We wanted people to be able to access their homes form the interior, not walk from an exterior garage in the dark,” Goldman explains.

Then there was the not-so-minor challenge of remediating the Keystone site: an $800,000 undertaking that entailed demolishing old factory buildings, removing their footings and cleaning up the soil to make the property safe for residential development. “The whole process takes years of work,” Goldman says. It’s time-consuming and not cheap. But there’s a definite upside.

Having a wealth of remediation experience means Stafford Homes can build fair-sized housing projects like Keystone Mews on urban land that many other developers would take a pass on. Which is fine by Goldman. “Without blowing our own horn too much, we’ve become experts in that field,” he says. “If you don’t know what you’re doing with respect to remediating a site, I wouldn’t take it on. It might turn out to be your worst nightmare.”

Gary Goldman’s family has been in the building and land development business for more than 50 years. His grandfather Samuel was a carpenter and contractor who emigrated from Russia before the turn of the 20th century.

In the early 1950s, his father Murray started The Goldman Group, a land development and construction company that specializes in a variety of areas, including residential, commercial and industrial and hotel development.

One of the company’s recent projects is Encore at Equinox, a 39-storey, 403-unit condo project in Scarborough that’s being developed in partnership with the Monarch Corp.

Stafford Homes, launched by Gary Goldman in 2001, is the low-rise and medium-density division of The Goldman Group. (Gary Goldman’s son, Jonathan, works with the family companies, as well). The firm also currently has six brownfield projects in “various stages of clean-up and rezoning,” Goldman says.

Reference: The above article was written by RYAN STARR and published in TORONTO STAR, New in Homes & Condos section on Friday, April 2, 2011.