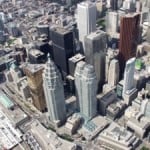 Peter Politis, principal at Greybrook Realty Partners Inc, sheds light on the current condo market in Toronto, and what’s around the corner. The Toronto CMA new condominium market has quickly rebounded from the slowdown seen in the latter half of 2008 and the first part of 2009. Purchasers are flocking to Toronto and developers are obliging with a record number of new project openings in 2011.

Urbanation Inc., the leading source of information and analysis on the Toronto condominium market reports that 2011 kicked off with a bang, 5,201 new condo sales were recorded in Q1-2011. That was just 214 sales shy of the record first quarter results from 2010. The resale market also showed a strong start in Q1, with 3,952 units sold, just 338 fewer than last year’s first quarter record of 4,290.  “These near record sales in the first quarter of 2011 mark a prelude to an even more vibrant second quarter,” says Ben Myers, Urbanation executive vicepresident and editor.”This momentum will continue into the second quarter, when an estimated 45 new condominium projects, representing 9,500 units, will launch,” says Myers. “That’s a healthy increase over the just 23 new condominium towers launched in the second quarter of 2010.”

Meanwhile, the 17 new projects that opened in Q1 sold 63% of their 3,768 total units.  That number far surpasses the average absorption rate for new projects in their opening quarters between 2006 and 2010. Strong investor activity has helped push the new condo project quarterly absorption rate from below 40% in 2006 to above 50% in 2011. In addition, prices also climbed and the average price per square foot of unsold product in the Toronto CMA new condominium market in the first quarter increased by 3% from Q4-2010, and saw a 7% annual increase, to $543 psf.

Unsold index pricing of the remaining new condo inventory was also up in the former City of Toronto, reaching an average of $650 psf, as it was in the downtown core, where it reached $739 psf. Prices in the resale market also edged up by 2% over Q4-2010 to $382 psf, increasing the average resale index price in the Toronto CMA by the largest quarterly margin since the fourth quarter of 2009.

Resale index pricing in the former City of Toronto was $509 psf with downtown core prices reaching an average of $513 psf in Q1-2011. Resale supply also declined, dropping far lower than the record 10,997 listings from one year ago to 7,490 resale listings in Q1-2011.  “The major infusion of new units in the second quarter of this year should moderate pricing increases, but Urbanation expects near record quarterly sales in Q2-2011,” Myers added, “and an elevated level of project registrations, will also keep resale pricing increases temperate.”

The Toronto CMA new condo market is showing strong signs of maintaining its momentum.  Unsold inventory levels are sitting at approximately 17%, well below the historical five-year average of 22%. Resale activity has been steadily increasing over the last half decade. In 2006 there were just over 13,000 resale condominiums sold and currently Urbanation forecasts nearly 17,000 resale condo transactions for 2011.

Previously developing, or in transition, submarkets within Toronto’s downtown core, such as the King West and Beaches submarkets, have now matured. Investors and developers alike are looking for the next up-andcoming area to attract purchasers such as King East, Queen West, River City and Leslieville areas.

New projects with attractive pricing are coming to market and purchasers are responding with strong absorption rates.With readily developable land within the downtown core rapidly running out, Torontonians are witnessing the Manhattan-ization of their city. The universe of potential condominium purchasers is ever increasing, more and more empty-nesters, new Canadians and first-time buyers are entering the condo market.  Features such as affordability, low maintenance and proximity to the downtown core that these new condo projects offer purchasers make this an attractive option to a wide variety of end users and investors.  Developers and investors alike have successfully profited as a result of the continuously strong Toronto condo market over the last decade and current trends and statistics suggest its continual vigour.

Greybrook Realty Partners Inc. offer individual investors the unique ability to participate in the value creation activities of best in class residential developers within the City of Toronto. Investments of this type have been traditionally dominated by large financial institutions and pension funds.Investors are usually excluded from these types of investments due to the amount of capital required to qualify as well as an inability to access these types of opportunities. Since 1969, the Principals of Greybrook have been involved in the creation, development, construction, management and syndication of over 38 projects, totalling over 7,400 residential units.Approximately $470 million equity has been deployed creating an aggregate value of approximately $1.2 billion at the respective project completion dates while partnering with over 4,000 private investors.