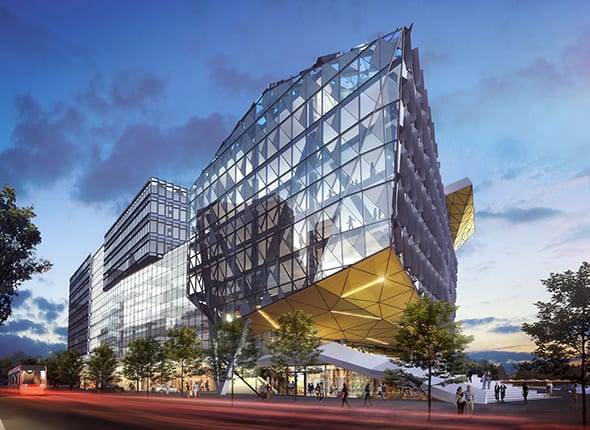 Waterfront Toronto has made a major announcement on the design for a proposed “Innovation Centre,” a nine-storey building being touted as the next stage of the eastern harbour redevelopment.  The proposed building will be located next to Sugar Beach and the Corus Building.  Menkes Developments Ltd., a leading Toronto-based developer, will begin construction once it finds tenants to occupy at least half of the 350,000 square foot complex. This is expected to occur in late 2016, with completion anticipated about two and a half years thereafter.

The project is currently in the pre-leasing stage and in the search for anchor tenants. It is estimated that approximately 2,000 people will work in the building. The building will be equipped with ultra-high speed broadband, since the center plans to target companies with big data usage needs, such as technology, interactive digital media, film and television companies.

The building, designed by Sweeny & Co Architects, will be divided into three main areas: an area to be called “The Exchange”, which will house meeting rooms and audio-visual labs that will be available for use by all tenants; an area to be known as “The Hive” (the largest of the three areas), which will house tenants’ offices with easily reconfigurable floor area; and a central area to be known as “The Nexus”, an atrium that will link the two other areas.