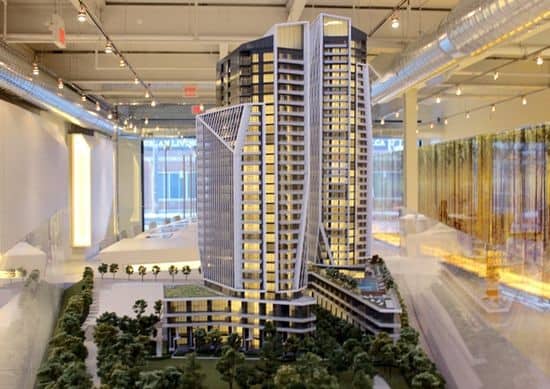 Given the strong sales response and positive press surrounding the Garrison Point development, Fernbrook Homes and Cityzen Development Group have decided to launch the sales program for Phase II ahead of schedule, and in conjunction with the clearance of the site.  Depending on construction progress, this is expected to occur in the fall of 2015.

With this amended schedule, it is anticipated that the concrete foundation for both phases can be poured simultaneously, resulting in cost savings and synergies as Towers I and II are erected at the same time.

Demolition is currently underway, with the on-site billboard fully disassembled and deconstruction of the existing buildings in progress. It is expected that demolition will be fully complete within the next 30-45 days. The aerial photos below show the excavating machines on site ready to begin as soon as the debris and rubble have been cleared away.