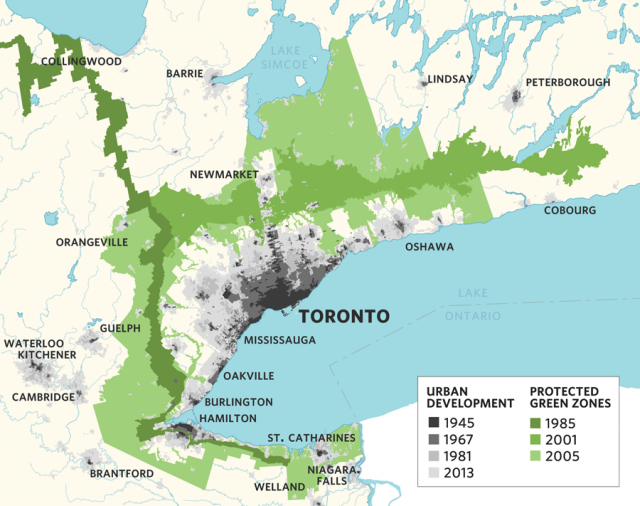 Ontario’s Greenbelt spans 7,300 square-kilometres and stretches from Cobourg to Collingwood to St. Catharines, making it the largest greenbelt in the world. Designated as protected lands in 2005 to prevent suburban sprawl and the destruction of natural marshes and agricultural land, the Greenbelt plan is now undergoing a coordinated land use planning review.

The province held several regional town halls from March to May 2015 to solicit public feedback on how to strengthen and improve existing plans, which focus on supporting regional transit and higher density neighbourhoods, protecting agricultural lands, and mitigating damage of local ecosystems. Map of Ontario’s Greenbelt, via Greenbelt.ca

Covering more land than the entire province of Prince Edward Island, the Greenbelt’s forests currently reduce carbon dioxide levels the equivalent of taking 27 million cars off the road. These ecosystems are the home of 78 threatened or at-risk species, but also offer a wide variety of outdoor spaces and recreation options for visitors and residents alike to enjoy.

With population growth in the Golden Horseshoe expected to rise 50% over the next 25 years, there are questions as to how the province can accommodate such a significant population increase without detracting land from the Greenbelt. However, the original Greenbelt Plan took this into account by leaving 1,500 square kilometers of undeveloped land available for new communities to take root and existing cities to expand. Ensuring these communities have the required infrastructure to connect with neighbouring municipalities makes them an easier sell for homebuyers who’d prefer to buy in more urban areas – something Greybrook and our developer partners have taken into account when investing in areas such as Fergus, Hamilton, Vaughan and beyond. Construction Advances at Storybrook in the Town of Fergus Construction Continues at Storybrook in the Town of Fergus