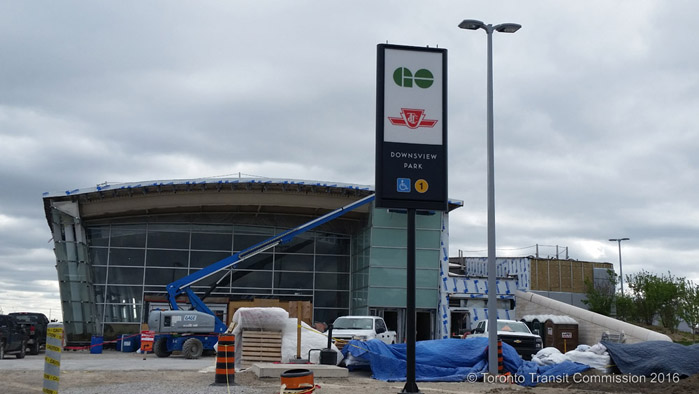 Premier Kathleen Wynne and other dignitaries made the last ceremonial taps to complete track installation on the Toronto-York Spadina Subway Extension (TYSSE) to Vaughan last month, almost eight years after construction began on the project. The Toronto Transit Commission released a time-lapse video of the first end-to-end trip along the 8.6km line to mark the occasion, and construction of the six stations along the extension is 90% complete. The TYSSE is scheduled to open December 2017, and is expected to reduce the annual total of trips on area roads by 30 million. Downsview Park and Vaughan Metropolitan Centre stations will connect residents of Greybrook’s Downsview and Riverside in Pine Grove communities, respectively, with easier access throughout the GTA.

The province of Ontario has also announced over $150 million in funding for planning work on the Downtown Toronto Relief Line, and $55 Million for the Yonge Subway extension to Richmond Hill. Metrolinx will spearhead the Yonge Subway planning process in co-operation with the TTC, Regional Municipality of York and York Region Transit, in order to extend the existing line from Finch station to Richmond Hill Centre at the intersection of Yonge and Highway 7. Both projects remain in early planning stages, with construction and engineering expected to take approximately 10 years.

Each cross-municipality transit improvement provides required infrastructure updates for the GTA, allowing for the growth and expansion of existing and new communities in the region.

Watch video of the first ride along the TYSSE line here.
Learn more about the government of Ontario’s funding announcement here.