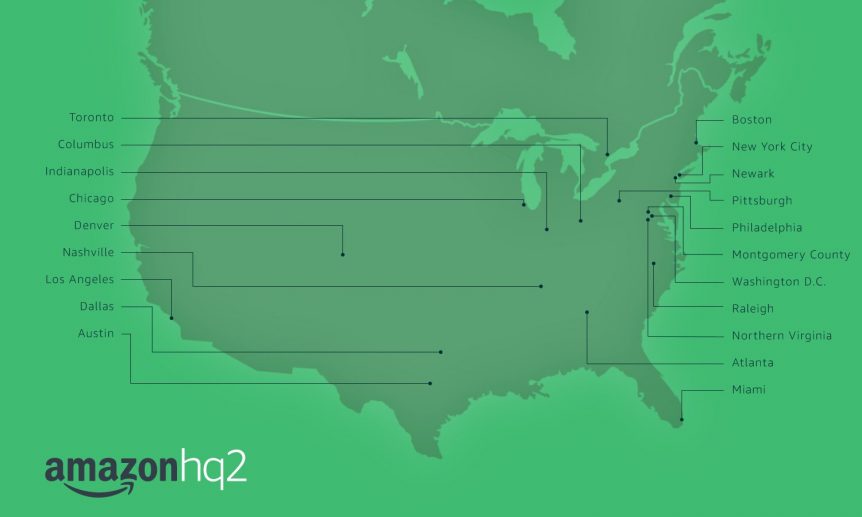 In September 2017, Amazon announced they would be accepting proposals from cities across North America to host their new multi-billion dollar headquarters dubbed HQ2. After receiving 238 bids, Amazon recently whittled down the competition to 20 proposals, including Miami and Toronto, the latter being the only Canadian city to make the shortlist.  HQ2 represents a direct investment of $5-billion USD to the winning city from the global e-commerce giant and is projected to bring 50,000 technology jobs along with it.

Locating HQ2 in Toronto is “just a no-brainer,” according to former chief planner, Jennifer Keesmaat, who assisted in shaping Toronto’s bid before stepping down in September. “We’re very open to talent and we’re very open to immigration.” Toronto Mayor John Tory championed the city’s unique offering in a statement at a news conference following the shortlist announcement. “We’re excited to have this opportunity and to be able to tell Toronto’s unique story,” he said. “There is no other place in North America that can boast the same talent, the same quality of life, the same vibrancy, the same economic strength.”

Meanwhile, Miami is the only city in Florida to make the shortlist and bested several other US cities known as corporate hubs to do so. Mayor Carlos Gimenez described the Miami area as “Tech Center of the Americas” in a letter included in the original bid submitted to Amazon in 2017, and more recently stated that “Miami is a city of the future,” in a press conference following the shortlist announcement. Gimenez also highlighted the fact that Miami is one of the Top 10 college towns in the United States as an underrated bonus for the region’s bid.

Greybrook is thrilled to see two regions we develop in included in the final shortlist and look forward to sharing more information regarding the HQ2 bidding process as it progresses.

Visit the Globe and Mail to read more coverage of Toronto’s bid.