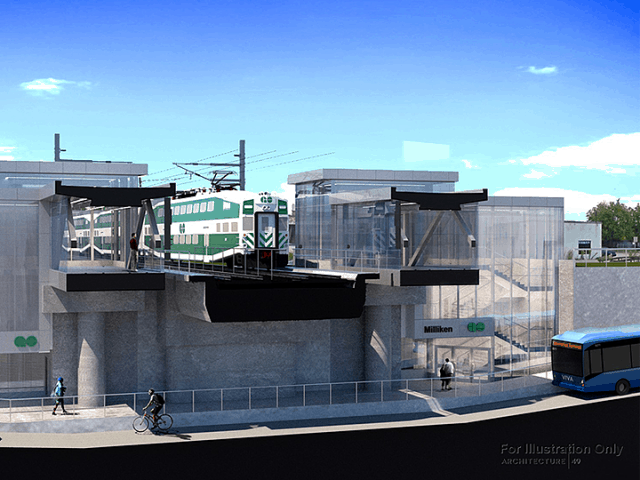 EllisDon Transit Infrastructure has been awarded a $254.5 million contract by Infrastructure Ontario and Metrolinx to finance three station upgrades on the Stouffville GO Transit line. The design process is currently underway, with construction expected to begin this September and concluding in December of 2020.

A new second track and third turning track will be added to Unionville station, along with expanded parking facilities, canopy enclosures on side platforms and other passenger amenities. Milliken Station enhancements (see cross-section below) include a new east-side platform and passenger access tunnels to connect to the west platform which will be upgraded with a full enclosure. Pedestrian access to Steeles East will also be provided through a new connection at Milliken Station. Agincourt Station will be relocated to a new building to accommodate a new second track and side platforms with enclosures and pedestrian access tunnels.

These station updates will improve commutes and accessibility along the Stouffville GO line, benefitting future residents of our Stouffville developments (Stouffville I and Stouffville II) with developer partners Cityzen Development Group and Tercot Communities.

Learn more about the Stouffville GO updates and contract on UrbanToronto.