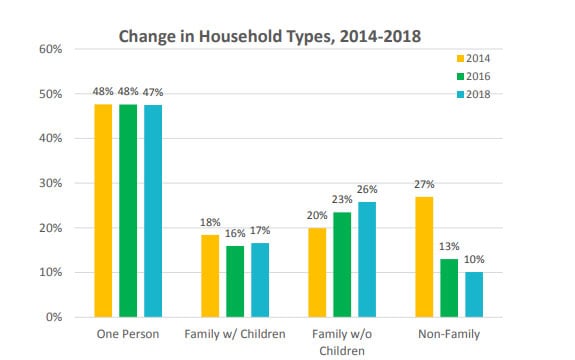 The population of downtown Miami has increased 38% since 2010 according to a report released by Miami’s Downtown Development Authority. The report estimates that more than 92,000 people live in downtown Miami today, which is twice as many residents as in 2000 and that number is expected to exceed 100,000 by 2020. Millennials (aged 20-39) make up 44% of downtown’s residents, a 104% increase since 2010 and a clear indicator of the area’s suitability for young professionals.

Although one-person households are the most common household type (comprising 47% of all households for the region), the report also found that more children live downtown now than previously (a 53% increase in residents aged 0-14 since 2010).

It is also worth noting is that the gender gap between residents has lessened, with 49.4% of residents are female and 50.6% are male as of 2018, compared to a 3% gap between the sexes in 2010. Downtown residents also have a significantly higher median household income ($76,610 USD) than those within the broader City of Miami ($32,937 USD).

These findings support our development thesis that our 300 Biscayne and 400 Biscayne projects are well-positioned in the centre of downtown’s population growth, providing suitable housing options for the young, diverse residents attracted to the area.