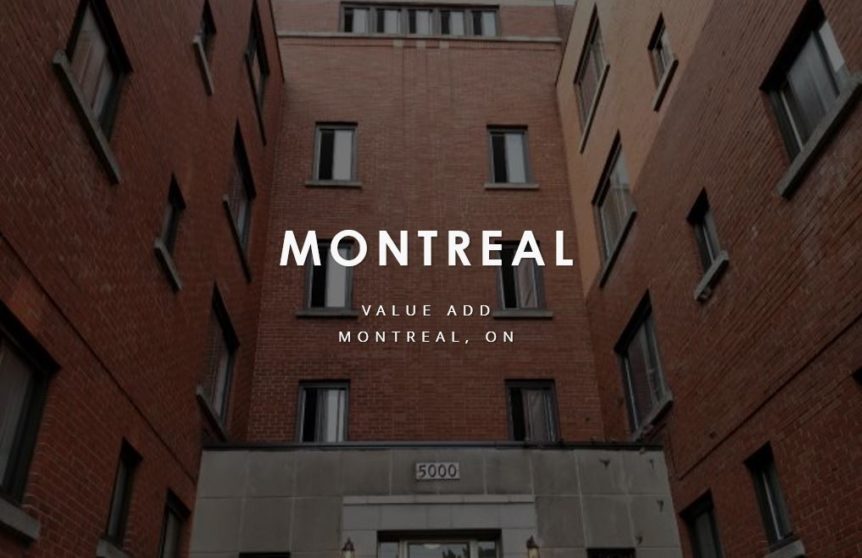 Greybrook Realty Partners and Marlin Spring Investments announced today the acquisition of a portfolio of rental properties in the Province of Québec. Entities jointly owned and controlled by Greybrook and Marlin Spring have purchased eight apartment buildings in Montréal, and two apartment buildings and a townhouse complex in Québec City, for an aggregate purchase price of $117,500,000. The portfolio consists of 450 rental units in Montréal and 217 rental units in Québec City. Greybrook and Marlin Spring Investments will oversee the execution of a value-add program which involves renovating rental suites, improving common areas and increasing building efficiencies throughout all of the portfolio properties.

Seven of the eight Montréal properties are located in the suburb of Hampstead and the eighth Montréal property is located downtown, minutes from McGill University and Concordia University. The two Québec City apartment buildings are located in the Limoilou District, and the third property, Gingras townhomes, is located west of downtown Québec City.

The Province of Québec represents approximately 20% of Canada’s GDP and it has the second largest provincial economy in the country. According to RBC’s Provincial Outlook Report, Québec is expected to lead all provinces in GDP growth in 2018 with a growth rate of 2.6%. The province’s population has grown by approximately 9.1% between 2007 to 2017 and unemployment in Québec is at its lowest recorded level since 1976.  These economic factors have contributed to strong demand for housing and a drop in vacancy rates in both Montréal and Québec City. As reported by the CMHC, between 2015 to 2017 Montréal’s vacancy rate fell from 4.0% to 2.8% and Quebec City’s vacancy rate fell from 3.5% to 3.0%.

“With the acquisition of this portfolio and our recent acquisition of two garden-style apartment properties in Houston, Texas, we have acquired over 1,200 units as part of our multi-family value-add portfolio in the past three weeks,” said Peter Politis, CEO, Greybrook Realty Partners.  “Strong economic drivers, robust population growth and rising homeownership costs have supported tightening rental markets across Montréal and Québec City in recent years. With consistent rental demand and rent growth expected to persist, we will continue to explore attractive opportunities in these submarkets.”

“Marlin Spring and Greybrook have a strong history of successful partnerships and we are delighted to partner on this acquisition, a great addition to our Canadian portfolio of value-add assets,” said Ben Bakst, CEO of Marlin Spring Investments. “With current rents for each property sitting at below market value relative to comparable units in the vicinity, we believe an opportunity exists to meaningfully increase the properties’ Net Operating Income by executing a value-add program to upgrade the assets.”