Since 2017, Greybrook has invested in the development of 11 residential communities in Durham Region that is expected to bring more than 2,000 new homes to the City of Oshawa, Town of Whitby and the Municipality of Clarington.

As investors in the Region, we are very pleased with the recent announcement that General Motors (GM) will be reopening their assembly plant in Oshawa and investing $1.3 billion to retool the plant that was previously shutdown in 2019. According to Jerry Dias, Unifor’s national president, the reopened plant will bring between 1,400 and 1,700 jobs, replacing most of the 3,000 jobs lost in December 2019. This investment, along with GM’s new Autonomous Vehicle Test Track, will position GM and Durham Region as key players in advanced mobility in Ontario.

While Oshawa has long been known as the Automotive Capital of Canada, and will continue to maintain a strong automotive sector with this latest investment, the City, and more broadly Durham Region have in recent years focused on strategic planning and initiatives to attract new investments, diversify their economy and support job growth.

Recent announcements include an agreement reached with Amazon to build two Amazon fulfillment centers in the Region. A one million-square-foot distribution facility with 1,000 new jobs in the Town of Ajax and a 354,000 square foot facility in the Town of Whitby, with hundreds of full and part-time jobs.

In June 2019, Ontario Power Generation (OPG) announced it will build a new Corporate Campus in the Municipality of Clarington. The campus, expected to complete in 2024, will house the company’s corporate headquarters, in addition to renewable generation and nuclear staff; bringing more than 2,000 jobs to the area.

Infrastructure investments extending transit connectivity to the Region are also planned. Early in 2020, Metrolinx Board of Directors endorsed the GO East Rail Extension through Oshawa to Bowmanville in Clarington, featuring four new station stops – two located in Oshawa, and GO stations in both Courtice and Bowmanville, which are expected to drive economic revitalization in several key areas, while supporting active transportation within the communities. According to Metrolinx, this investment is expected to have a positive economic impact on the communities for the next 50 years. 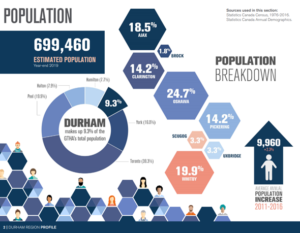 With Greybrook’s first housing development in the Region, Orchard West, nearing completion and in the final stages home occupancy, and other sites in active development, we are thrilled to be a part of Durham’s growth and continue to actively seek new investment opportunities in the Region.

Get in touch to learn more about upcoming investment opportunities.