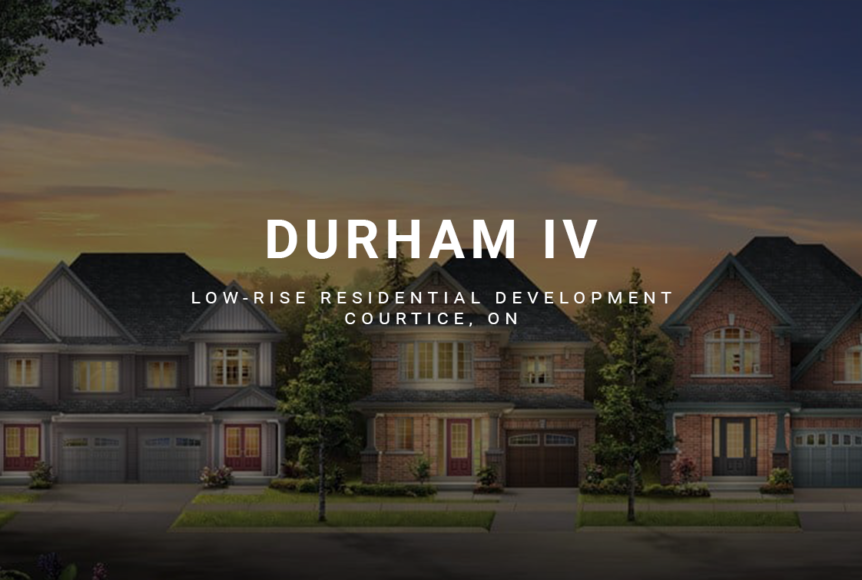 Greybrook Realty Partners Inc. announced today the successful closing of an equity investment by its managed issuer of $19,360,000 to acquire and oversee the development of a parcel of land located in Courtice, Ontario. Together with its developer partners, Fieldgate Homes and Redwood Properties, Greybrook will develop the land into a residential community consisting of over 360 single-detached homes and freehold townhomes.

Located east of Toronto in Durham Region within the Municipality of Clarington, the community of Courtice offers residents a blend of small-town living combined with access to an abundance of nearby amenities located throughout the Region. The 54-acre development site, situated at the southeast corner of Trulls Road and Pebblestone Road in the north end of Courtice, is located inside the urban boundary and surrounded by the protected Greenbelt Natural Heritage System to the north and east. The site’s proximity to the new Highway 418, which links Highways 407 and 401, provides convenient access to other parts of the Region including neighbouring Oshawa and Whitby, and access to cottage country is only a short drive away via Highways 418, 407, 115, and 35. The Region’s transit infrastructure is also expected to expand. In 2020, the Metrolinx Board of Directors endorsed the GO East Rail Extension through Oshawa to Bowmanville in Clarington, which is expected to feature four new station stops, including one in Courtice, further enhancing the area’s access and connectivity within Durham Region and the broader Greater Toronto Area.

Durham, which makes up 9.3% of the Greater Toronto and Hamilton Area’s total population, has grown in population by 8.4% from 2016 to 2019. The Region is home to academic institutions including Ontario Tech University, Durham College, and the Trent University Durham campus. Durham has been attracting talent, and a number of recognizable businesses have planned expansions into Durham that are expected to bring jobs to the Region. Ontario Power Generation plans to build its new corporate headquarters in Clarington, which is expected to be complete in 2024 and produce over 2,000 jobs, while Amazon’s new distribution centre in Ajax is expected to open in September 2021 and add 1,000 new jobs.

“Durham has experienced consistent growth over the years, attracting residents and job seekers, and the relative cost of housing in the Region has made it one of the most in demand housing markets in the GTA”, states Sasha Cucuz, CEO of Greybrook Securities Inc. “This is Greybrook’s 13th low-rise development in Durham Region, bringing the total number of homes we are developing alongside our developer partners to more than 2,300 homes. We are thrilled to be partnering with our developer partners, Fieldgate Homes and Redwood Properties, who have a long history of success developing and building within Ontario and the Region, including Courtice.”

The portfolio of low-rise development holdings managed by Greybrook Realty Partners includes several development properties that are projected to result in the completion of over 11,000 ground-related homes in the Greater Golden Horseshoe region.